Letter from the President

Overall the best demo we have ever had at this location, given all the restrictions of the demo site.
Sgt. Goodall fabricated two bunkers for defense, our members augmented the site with driftwood, camo netting, barb wire, simulated blast/smoke,  etc..
​
Five more German troops appeared and our defense was very well represented. The Allied force of approx. 20 followed script and advanced in a pace to allow the demo to develop and give the public a very good show.

Campsite was down this year all due to weather day prior but demo day was excellent  weather both temperature and sunshine. One major vendor was in place and public interaction was typical of the show.  Special thanks to team member Syd for supplying tent fly’s for the base of operations  for both Allied and Axis.

This is last year for Sgt. Goodall is  to head up this portion of the event, we will have to see if it will be a go next year.

That is all:
“STICK”
​OBERFELDWEBEL / PRES. III/5FJR 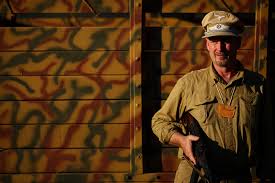 Letter from the President

Just a short AAR from our last mission , Linden, TN.

Our unit was  in force first time at this battle and it was an  impressive venue. The entire town backs this event with numbers, site prep, and all out support. We have had two members attend prior and brought back reports, however, this year was the largest overall in numbers by all attending units and looks to grow.   It will be limited by the area that can be used so we should all sign up as soon as the site opens next year if we vote to attend. Several armored vehicles, tank, halftrack, armored cars, trucks, motorcycles, jeeps, kubels, DUKW, search light, quad 50, A.T. Guns – lots of equipment on both sides.

III/5 FJR had 13 members in support with two being first time attendees. Josh and Zack #2 – welcome aboard. Two command tents, one troop tent, Ford truck, Pak 36/37 and one motorcycle/sidecar combo.
Several positive comments on our campsite area and our two RED-CROSS nurses in  support. Overall a great event and I would suggest we list this as one of our premiere events and increase our support next year.

Weather was to the extreme for the time of year but staff provided water as well as two meals to all who pre-reregistered. Camping area was a very good site , room was tight but manageable.
Military vendors were light but present, I would think this will change next year with the event and numbers  growing.

That is all:
“STICK”
OBERFELDWEBEL / PRES. III/5FJR